INTRODUCTION TO MICROPROCESSOR AND MICROCOMPUTER ARCHITECTURE:

A microprocessor is a programmable electronics chip that has computing and decision making capabilities similar to central processing unit of a computer. Any microprocessor-based systems having limited number of resources are called microcomputers. Nowadays, microprocessor can be seen in almost all types of electronics devices like mobile phones, printers, washing machines etc. Microprocessors are also used in advanced applications like radars, satellites and flights. Due to the rapid advancements in electronic industry and large scale integration of devices results in a significant cost reduction and increase application of microprocessors and their derivatives.

·Bit: A bit is a single binary digit.

·Word: A word refers to the basic data size or bit size that can be processed by thearithmetic and logic unit of the processor. A 16-bit binary number is called a word in a 16-bit processor.

·Bus: A bus is a group of wires/lines that carry similar information.

·System Bus: The system bus is a group of wires/lines used for communicationbetween the microprocessor and peripherals.

·Memory Word: The number of bits that can be stored in a register or memoryelement is called a memory word.

·Address Bus: It carries the address, which is a unique binary pattern used to identify

a memory location or an I/O port. For example, an eight bit address bus has eight lines and thus it can address 28 = 256 different locations. The locations in hexadecimal format can be written as 00H – FFH.

Microprocessor communicates and operates in binary numbers 0 and 1. The set of instructions in the form of binary patterns is called a machine language and it is difficult for us to understand. Therefore, the binary patterns are given abbreviated names, called mnemonics, which forms the assembly language. The conversion of assembly-level language into binary machine-level language is done by using an application called assembler. 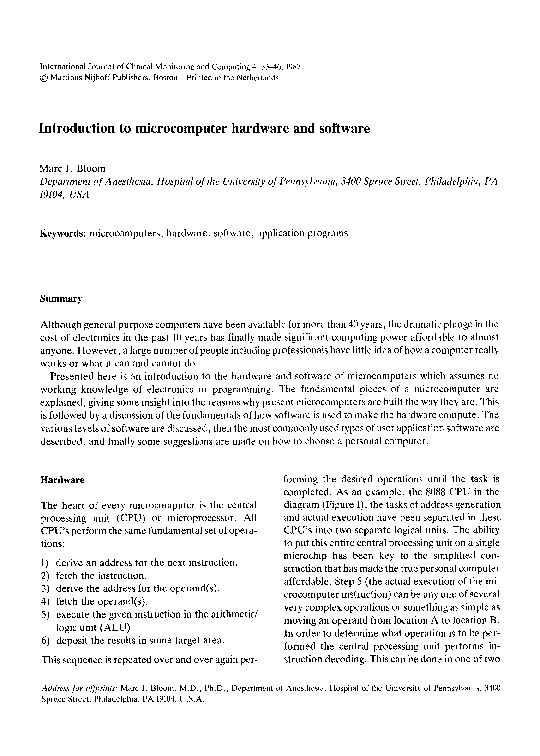 The semiconductor manufacturing technologies used for chips are:

Based on their specification, application and architecture microprocessors are classified.

Based on size of data bus:

·General-purpose microprocessor- used in general computer system and can be used by programmer for any application. Examples, 8085 to Intel Pentium.

·Microcontroller- microprocessor with built-in memory and ports and can be programmed for any generic control application. Example, 8051.

What Is Microcomputer Applications?

Physical product development on a shoestring. Creating effective digital learning content doesn’t require huge amounts of technical skills or large budgets. In an age or resources not courses or microlearning there are great sites and tools still. Here are three strong strategies for physical product development on a shoestring that you can implement right away. Refine the idea, define your target audience Before you burn your money and time on a new product, do your homework.